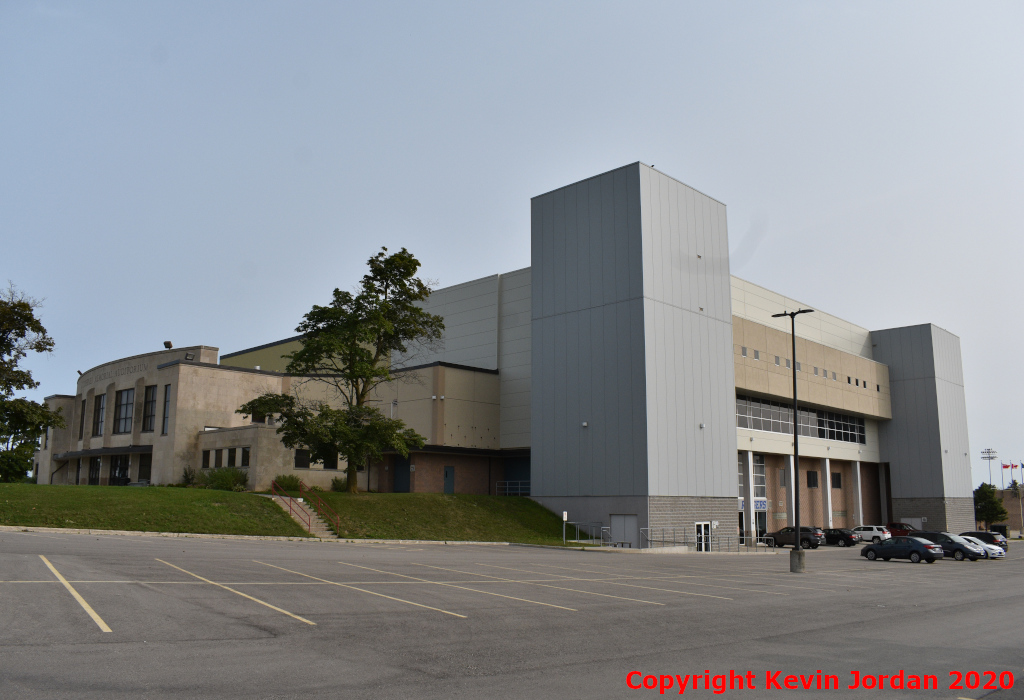 The Kitchener Memorial Auditorium inspires more conflicting feelings from me than any other arena I have visited. It is one of the truly great junior hockey arenas in Canada. It is a place where the interesting architecture, great views, and fantastic atmosphere of an old arena meets the clean facilities, ample parking and great scoreboard and sound system of a new one. It is a joy to attend games there... or at least it would be if I was not a Knights fan, and the Aud was not filled with Rangers fans. The rivalry has become heated almost to the point that I don't enjoy going to the Aud as much as I used to for Knights games, which is a terrible shame. But that said, if you're a fan of any other team, and if you're small enough to fit into the narrow seats comfortably, you'll probably love going to the place again and again.

The Auditorium complex is a sprawling building in older suburban Kitchener. The old main entrance has one of the best facades in hockey, with a classically inspired design and the words KITCHENER MEMORIAL AUDITORIUM spelled out above the door. When the arena was built, it was designed like Maple Leaf Gardens, with a main lobby behind the net leading to two equal sides, but one of the many building expansions that has happened since then has meant that the main entrance is now at what used to be the rear of the building. The Aud complex also includes Centennial Stadium, which is used for football, and Jack Couch Stadium, the baseball diamond which is home to the Inter-County League's Kitchener Panthers. The Aud's new main entrance cuts the arena complex right in half, so that when you enter, you are in a wide hallway with the community pads on one side and the Rangers' home on the other. There are pictures hanging all over the walls and you can feel the history of the Western Conference's oldest team bearing down upon you as you wander the halls. There are also Olympic banners from the Kitchener-Waterloo Dutchmen, who represented Canada in hockey at the 1956 games in Cortina D'Ampezzo, Italy, and in 1960 in Squaw Valley, Calif.

Once you get inside the rink itself you see one of the OHL's best arenas laid out in front of you. The seats are all gold in the lower half and red in the upper half, and they surround the rink wherever they could bolt them in. The mid-2000's expansion also added a third tier of blue seats on one side of the ice. The seats themselves are pathetically tiny, and must be uncomfortable to anyone larger than average size. Leg room is also terribly inadequate. Views, however, are absolutely excellent. Leg room is far more ample in the new section, but the view of the ice hasn't been sacrificed - the angle of seating is very steep, and I loved the fact that you can walk from the ice all the way up to the back row of the arena in the new section. There is no economic segregation at the Aud, and nothing preventing you from moving all over the old building. The layout reminded me, again, of Maple Leaf Gardens, with the side seating all on one level and stretching back what feels like forever. There is also standing room located along the press-box side of the building at the top of the seating area, behind one of the nets, and down by the glass behind rail seats right at ice level. There is a restaurant located behind one of the goals and private boxes down the smaller side.

The concourse stretches all the way around the building. In the one end behind the net you can see what used to be the arena lobby, with the former ticket booths now a concession stand. The lobby has Bauhaus-style factory windows and grey, green and red terrazzo floors and is gorgeous. The new blue seat upper level also has its own concourse, though weirdly, access to it is poor. If you don't know where you're going, the best way to get up there is to climb a flight of stairs located behind a door marked "No Re-Entry!"

The boxes and much of the new-fangled equipment in the Aud was added at part of the massive renovation project in 2002. The scoreboard is one of the league's best. There is an HD video board with an excellent replay function; they also use it for "RangerVision" before the game, which is a TV program thing that psyches people up for the game. The sound system is relatively good for an older building and is not overpowering - a very much appreciated touch. Whenever most hockey teams at any level score a goal, the sound system instantly drowns out all cheering with a blasted foghorn and then plays either "Rock & Roll, Part II" or some dancey-techno-crap music at 1,000,000 dB. It's one of the most annoying things about any hockey experience in this age we live in - call me old-fashioned, but I believe that after a goal, the only thing making sound should be the fans. In Kitchener, though, they get a pass. After every Rangers goal, the Rangers have their own song, borrowed from their namesake in New York. It's a high-tempo number with a chorus of "Whoa-oa-oa LET'S GO RANGERS!!!" The fans really get into it. Much like the "OK Blue Jays" song, it's silly but incredibly charming and cute as well. It's enough to warm any hockey fan's heart, even if you're a cold-hearted bastard like yours truly.

While the Aud has the youngish character of a newer building, it still shows its age in several places (and I mean that as a compliment). There are painted bricks and exposed beams in the concourses again reminiscent of Maple Leaf Gardens, and there is memorabilia and history everywhere. In addition, the exposed beams now feature the names and numbers of a cornucopia of former Rangers, which is a wonderful touch. Historic murals and photographs decorate the walls. There are little food stands everywhere, selling the usual arena fare plus a few "made-in-Kitchener" items like Bavarian beer nuts. Mmmm... beer nuts. Washrooms are clean and plentiful. The Rangers also enjoy what is unquestionably the finest team store in the OHL. They really have thought of everything that any fan could ever want, there are souvenir items of every shape, size and colour. If you've ever wanted anything at all with a Kitchener Rangers logo on it, the odds are that the store has it for sale.

Banners hang everywhere from the ceiling, reminding you of Kitchener's long, proud history. The Rangers have numerous championship banners as well as two Memorial Cups, four "honoured" numbers and the like. They also have retired #1 for "The Fans" which in my opinion is ludicrous. The fans don't play hockey. I'm all in favour of honouring the fans, but raising a retired number for them is unmistakeably bush-league - about the only thing in Kitchener that is.

Ranger fans... where to begin? The atmosphere in Kitchener is phenomenal. Loud, rowdy, raucous fans cheer wildly, boo harshly, chant, scream and do anything you'd want good fans to do. The old Aud shakes to its foundations when the fans get going. The Tullio Arena is uncontested as the OHL's loudest, but the Aud has a good claim at second. Yet again, the London-Kitchener rivalry has reared its ugly head at times, and the Aud joins Windsor Arena as the only rink where I have ever feared for my safety. That's not to say that security isn't any good, just that they can't be everywhere at once, and, well, Ranger fans really hate London. Fans of 18 other teams will probably find Ranger fans a little more accomodating, but the passion in the Tri-Cities runs over a little too often for the liking of anyone who's not already pre-disposed to confrontation.

The only other minor annoyance of the Aud since the most recent expansion is the parking. The parking lot was not expanded along with the building, so on days when the Rangers sell out, there are no longer enough spots on site for the needs of the arena. There is parking on the street in the neighbourhood nearby, so overall that wouldn't be a huge bother, but the Rangers and/or the city don't manage traffic flow well at all, so it's possible to get bottlenecked in a full parking lot, blocked off by more incoming cars behind you, and with nowhere to go. Obviously there was no free land to continue to expand the lot to match the new capacity, and that's fine, but the gameday staff could do a far better job managing the incoming traffic flow to prevent congestion.

Overall, the Aud manages to mix old-time character with new-fangled facilities, which begs the question, "Why can't they all be built like this?" The combination of fantastic views and atmosphere make attending games there more than worth it. Yet there's the rub - the fans are a big part of what makes the Aud experience what it is, but their hardcore nature can make attending games there unpleasant as a fan of a team they hate. Still, if I had an out-of-towner I was looking to introduce to the OHL, someone from California or Finland or Japan, and I wanted them to see the best that the OHL experience had to offer, I would take them to the Kitchener Memorial Auditorium. It's quite the place. 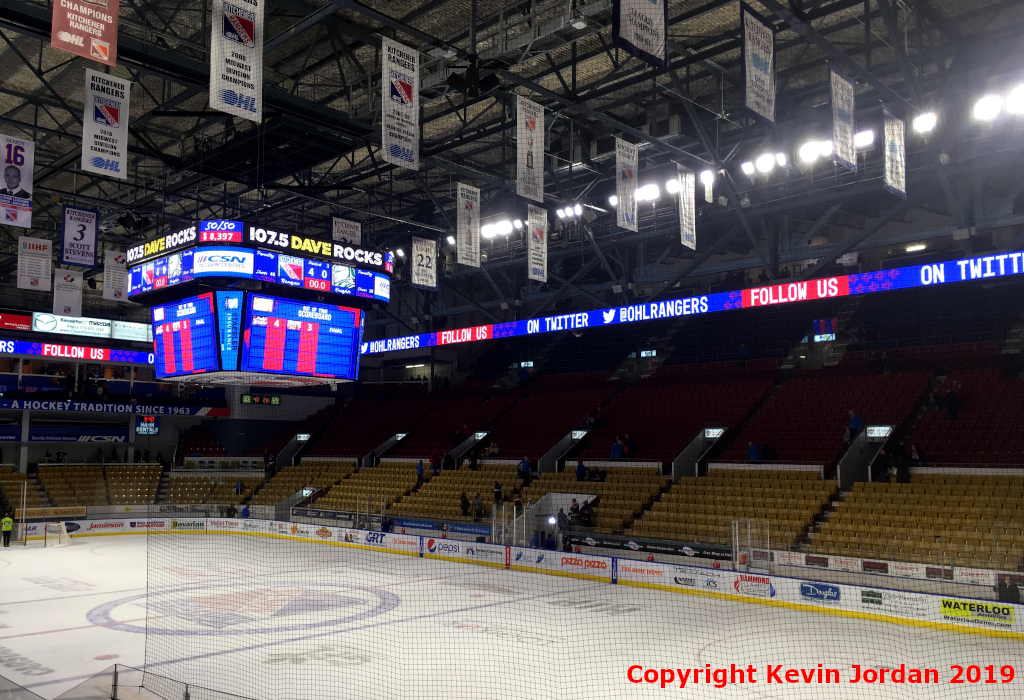 Future Developments
In spite of the Aud now having the OHL's fourth-highest capacity, and in spite of it having been very well-maintained over the years, there has still been talk in Kitchener for years of building a new 10,000 seat arena downtown. For now, the Aud's future is safe and secure, but the Rangers could sell more tickets than they do on a regular basis with more seats, and the Aud has likely reached the limit of how much further it could be expanded.


Franchise History
The Kitchener Rangers were once the legendary Guelph Biltmore Mad Hatters in the 1950's, but they moved to Kitchener in 1963-64.


Retired Numbers
Much like the Toronto Maple Leafs, the Rangers do not "retire" numbers but they do have numbers of honoured former players hanging from the Aud rafters. They are:

Inside the Kitchener Aud 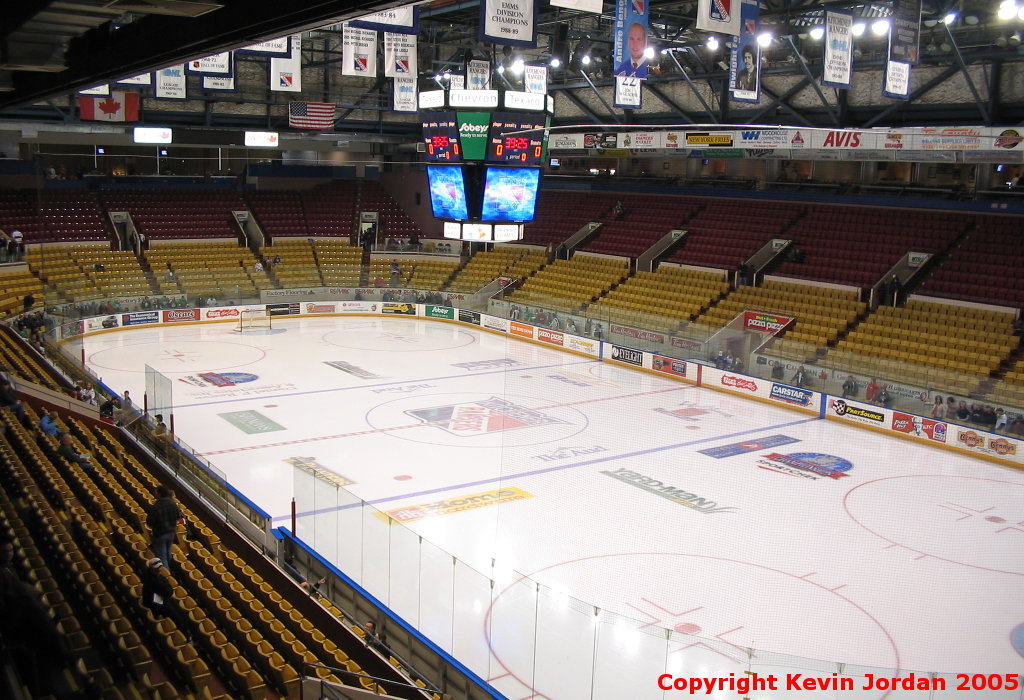