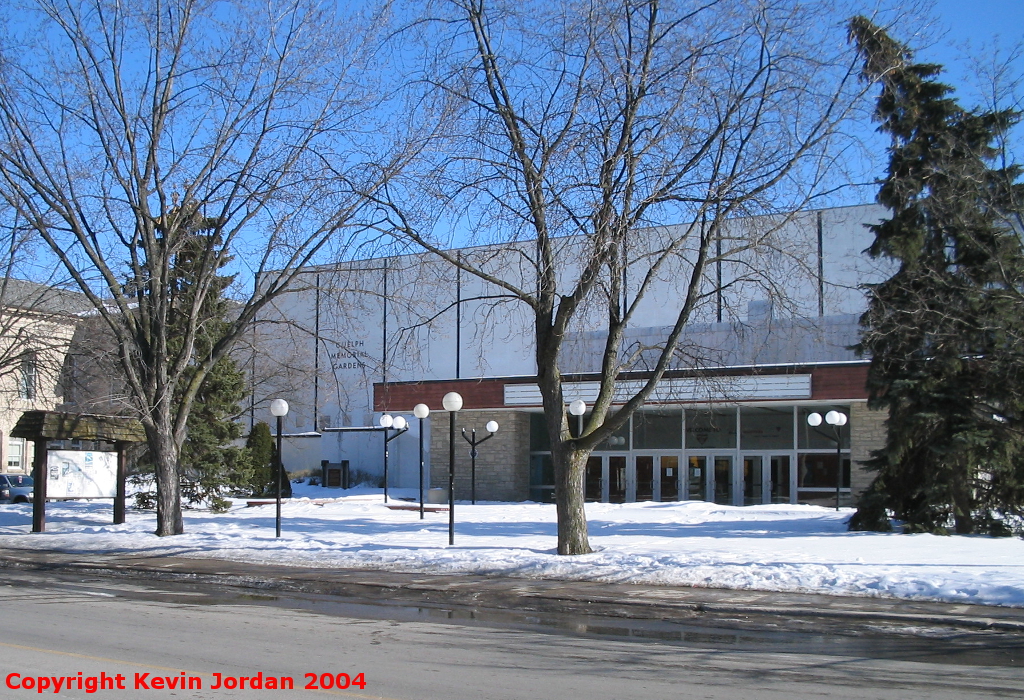 I am lucky enough to have started travelling to OHL games when nearly all the various classic junior hockey barns in Ontario were still standing and hosting the OHL. I got to see OHL games at the London Gardens and Oshawa Civic Auditorium, the Kingston Memorial Centre and the Sault Gardens, Windsor Arena and Maple Leaf Gardens. There's just one that I missed. Guelph Memorial Gardens was the first of Ontario's classic arenas to close, shutting in 2000 with the opening of the nearby Sleeman Centre. But when I started this website in 2003-04, I fired off an email to the city of Guelph, figuring it couldn't hurt to ask, and that's how a few weeks later I found myself in Guelph for a guided tour of the Guelph Memorial Gardens, led by the building's former superintendent, Daryl Fowler.

The Gardens was built in 1948 out of the remnants of a nineteenth century armoury. The large white wall on the building's front entrance was parged over at some point, but it was easily three feet thick and made of solid stonework and mortar. Passing through the ticket booths, you had to walk through the mortar wall to get to the concourse! The mortar wall and existing buildings on the site, as well as the presence of an adjacent railway line, also limited the size and shape of the Gardens. While you wouldn't necessarily have known it from the outside, the arena footprint was egg-shaped, and the limitations of the site meant that the concourse at one point narrowed to - no exaggeration - three feet wide. The concourse was painted a sky-blue colour and was a decent size for an older building apart from the aforementioned bottleneck.

When I visited, there was still a portrait of the Queen hanging over the ice, although all of the memorabilia had been moved. The arena bowl had a very strange colour scheme. Mr Fowler told me that back before the 1960's nearly everything was painted battleship grey, but the new colours felt like a bit of a 1960's pop-art overcompensation. All of the halls and railings were painted bright day-glo orange, while the good seats were pastel lemon yellow and the seats at the back were lime green. The seats were all still wooden originals, and were sold at auction before the Gardens's demise. Some were folding chairs, some were merely wooden benches.

As mentioned, the arena was an odd shape. Section 10 was so narrowly constrained by the rail line that there was only room for two rows of seats before the back wall. The egg shape meant that the far corner had a correspondingly massive amount of seating behind it. There was also one area behind one of the nets which still had support columns holding the roof up.

There were a few more interesting quirks to the Gardens's design. All of the emergency exits along the back side of the building emptied directly onto busy railroad tracks! In the event of an emergency, I'm told that the arena management tried to funnel people out the front exits whenever possible so as not to risk having any accidents with passing freights! Mr Fowler also took us up into the press box, which was a later addition to the building. The stairway leading up to the box was an impossibly steep and narrow metal staircase reminiscent of a ladder aboard a ship. Once you emerged from the bowels of the arena you found yourself suspended over the seating area, which finally led into the press box. The view was incredible. Our tour also included the old Zamboni room, which was being used for storage by the City when I visited, and the old Storm dressing room. The dressing room was nondescript now, with all the furniture moved out, but it was surprisingly big by old-building standards.

Behind one net there was an area known as "The Loft" which was once the Storm's lounge and restaurant area. The room was part of what was once Guelph's main fire station and predated the arena's construction. It felt like an Alpine skiing lodge, with wood paneling and half-timebered beams in the ceiling and white wainscotting, and a collection of medieval-looking windows along a far wall. The Loft's heritage designation saved it from the wrecker's ball, and I'm told it still remains as a part of the municipal office complex now on site.

I feel extremely fortunate that I was given the opportunity to see the building before the wreckers moved in, and I thank the City of Guelph and Daryl Fowler for allowing me the chance to see one of the grand old barns of the OHL before it was too late. 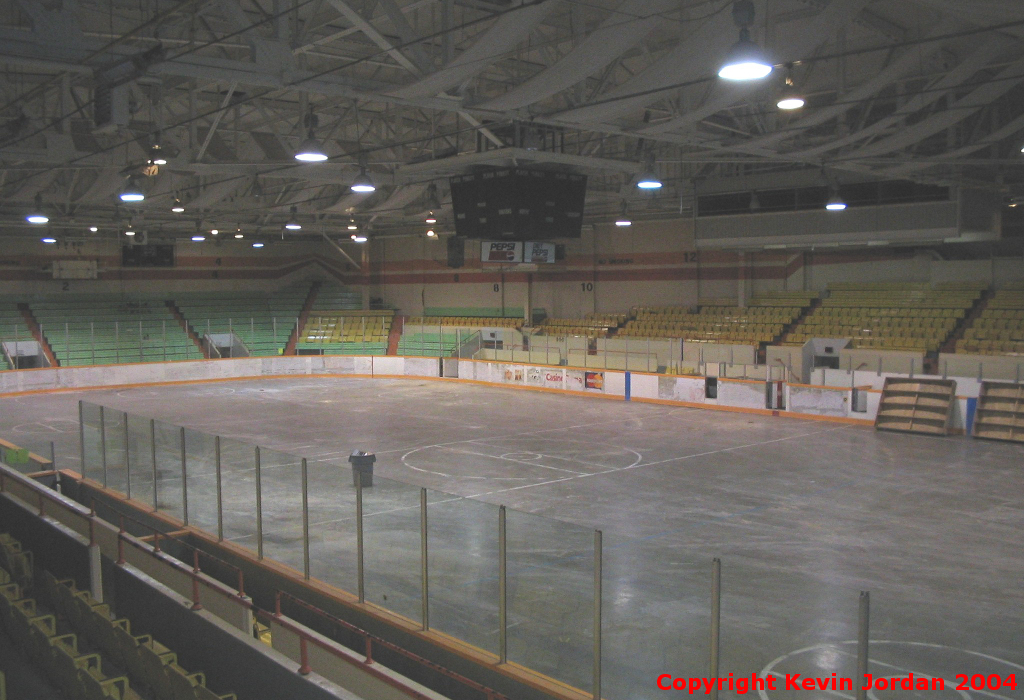 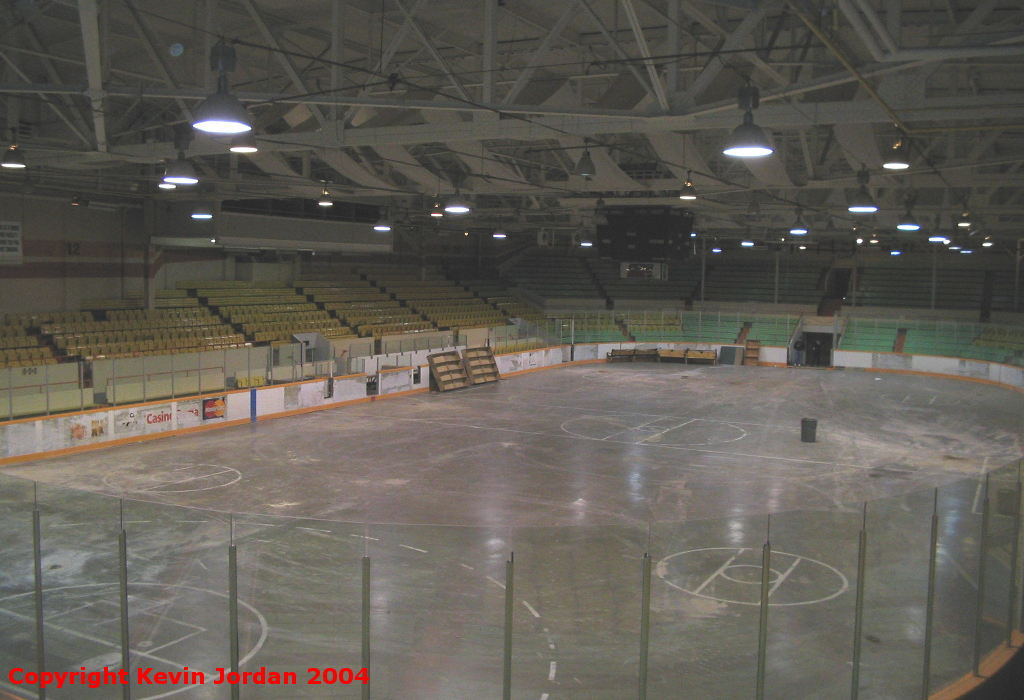 What's the Arena Used for Today?
The Gardens was originally built as a Royal Winter Fair Building in 1899. Due to the success of the fair, the complex was expanded in 1909 with the construction of a separate buidling south of the railway tracks that served as a horse stable and had a tunnel running under the train tracks to connect it to the main exhibition building. This building is the current Farmers' Market building. At some point again the complex was expanded (though I can't find any references to exactly when) and a more ornate building was built in front of the 1899 building extending right out to Carden Street.

According to the book Guelph: Perspectives on a Century of Change published by the Guelph Historical Society in 2000, the complex was taken over by the Federal Government in October of 1939 for the billeting of troops. The building fronting Carden Street served as the market for many years after the war once Memorial Gardens was opened. This buidling was later torn down and the main lobby/entrance of the Gardens was re-located to its present location from the old main entrance immediately beside City Hall. In 1948 the barracks was mostly torn down for the construction of the Gardens, although the heavy stone front wall and one room on the end was retained. The Gardens opened November 11, 1948, costing $425,000. It was used for various municipal functions over the years and was the home of many of Guelph's junior teams, including the Biltmore Mad Hatters, the Storm, and the Platers.

The Guelph Storm moved to the new Sleeman Centre for the start of the 2000-01 season, and the Memorial Gardens sat vacant until demolition commenced in December 2005. The City of Guelph, which owned the building and the land, decided to build a new municipal office complex on the site as an expansion of Guelph's tiny, nineteenth-century City Hall next door. The city hall expansion now occupies the site. The nineteenth-century front wall had its parging removed and windows restored as a part of reconstruction, and the Loft apparently also still exists in the office complex.

The Site of Guelph Memorial Gardens 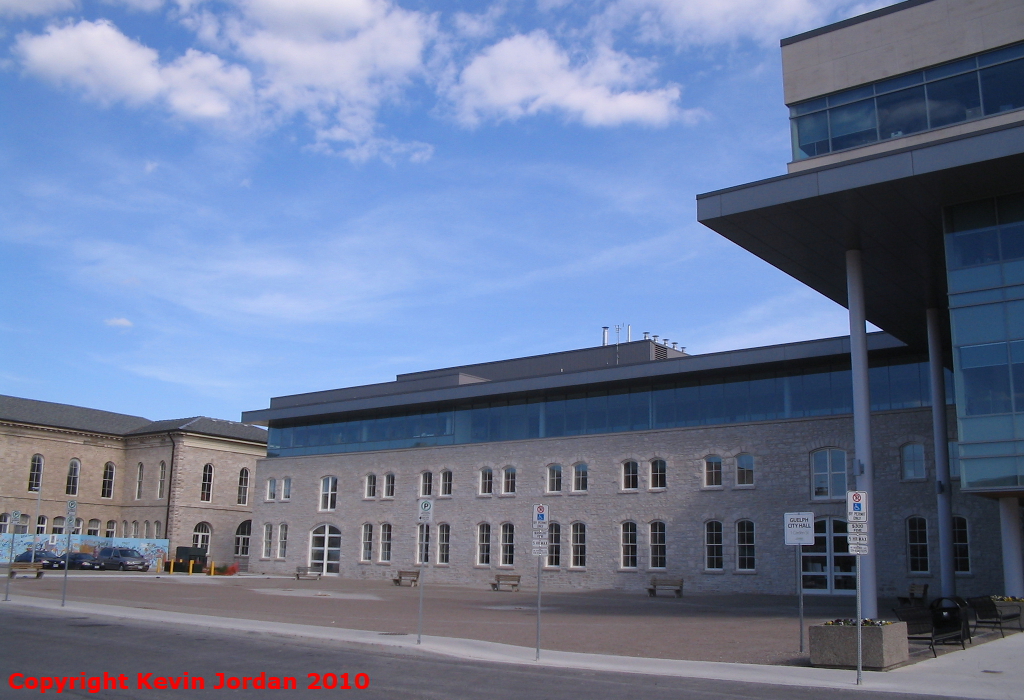 Return to Sleeman Centre
Return to the Main Menu