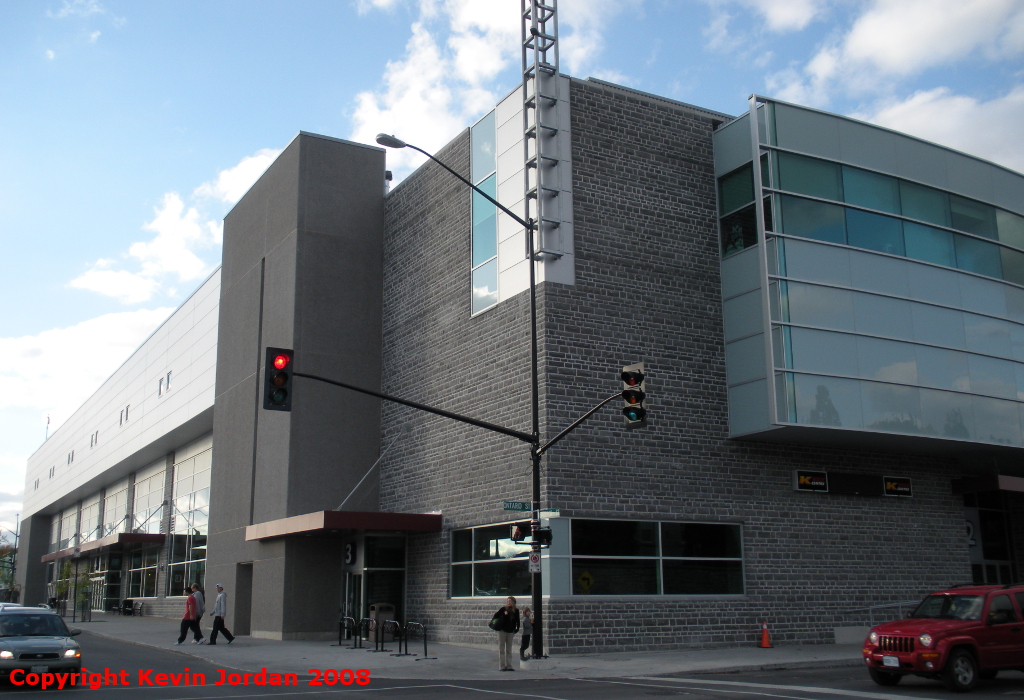 Shortly after the Kingston Memorial Centre closed, I received an email from a correspondent interested in talking about the old barn. I only ever visited it for a game once, in 2005, and back then I found an arena that was a fun place to watch a game, but charitably speaking, it was a dump. My correspondent's short email simply said "I've been going to games at the Kingston Memorial Centre since 1962... and it was a dump back then too!"

The Frontenacs, long a hard-luck OHL franchise, deserved a turnaround, and the shift between the old barn and the Leon's Centre is as striking as the difference between shinola and something that most certainly is not shinola. From first glance, the new rink looks terrific. The grey limestone architecture blends perfectly into Kingston's quaint and lively downtown, and it just feels like Kingston, perfectly suited to the surroundings. The second impression: the building gives new meaning to the word "shoehorned". Oh my. I don't believe I've ever seen an arena that is so constricted by its setting, as it feels like the Leon's Centre doesn't have an inch to breathe on any of its four sides.

The Place d'Armes site where the new arena sits is constrained by city blocks on four sides and also by the ruins of the old Fort Frontenac. King Street was actually narrowed to fit the new rink into the land, and as a result, there is absolutely no room to expand it anywhere. Yet some of the greatest ballparks and arenas in history were laid out with dimensions constricted by the necessity of fitting into a city block - Fenway Park's Green Monster being only one example of site dictating design - and in spite of the constraints, the new building is, surprisingly, roomy and spacious on the inside.

Ticket booths are set up facing the street, an unforgiveable sin in a hockey arena in Canada that conducts business during the winter months, but once you have your tickets, the lobby is striking. The concourse is luxuriously wide and limestone accents are everywhere. A large team store, a bar, and a group events area are all set up in the concourse without impacting the traffic flow, and the concourse is easily one of the two widest in the OHL along with London. The Leon's Centre, though, brings back an old-school design touch, and is the only new rink I've ever seen that successfully duplicates the 1960's-style twin concourse design. A second wide concourse extends around the top of the seating level, and the end result is one of the OHL's easiest buildings to navigate.

The class of the Leon's Centre continues in the seating bowl. The angle of seating is nearly perfect, and the seats themselves are wide, comfortable and set up with ample leg room. A new scoreclock with an HD video screen hangs over centre ice, and a U-shaped ring of suites extends around the top of the building. Huge windows overlooking the ruins of Fort Frontenac appear in one end; there were black curtains drawn for my afternoon game, but I'm told that for night games the windows allow some natural moonlight into the building. There are more than enough washrooms to handle large crowds, and they're clean and spacious. From a technical standpoint, the Leon's Centre is among the class of the OHL, and is an easy rival of Oshawa's GM Centre as the best new arena in the league.

And yet, in spite of all of the above, the Leon's Centre wasn't entirely lovable. The limestone construction outside screams Kingston, but inside in the seating bowl, the arena is uniformly battleship grey - grey seats, grey exposed concrete, grey ceiling, grey steel beams holding the place up. There is nothing on the inside that really makes the arena belong to Kingston or the Frontenacs - if you took down the banners and painted over the logo at centre ice, the Leon's Centre could just as easily belong to any other CHL or minor league team. The fascias at the front of the suite level are blank concrete, with no advertising hoardings or signage to add colour, and sadly, the limestone accents did not make their way into the seating area. The flaws aren't unfixable - even a few cans of black and gold paint would go a long way - but for now, the Leon's Centre's seating bowl is like an expensive formal living room in a large house that is largely for show. It's impressive to look at, but it doesn't feel like anyone actually lives there.

Game presentation is just OK in Kingston. The beautiful scoreboard is underused and the graphics package feels old-fashioned. Every stoppage in play, the scoreboard kept going back to the same graphic of the Erie Otters' logo (the opponent for the day) being dismantled in some manner and replaced by a Frontenacs' logo. The sound system was technically perfect, but again underused, with long periods of silence in intermissions as opposed to the customary music. Another flaw I noticed is that the Leon's Centre is one of the only sports facilities I have ever been to where the section numbers are not displayed in some fashion from the seating bowl. That's not to say you can't find your seat - both concourses are well-marked - but when the announcer says during the game "Fans, turn your attention to Section 102...", you actually have no idea where to look, because Section 102 is not marked in any way.

Unfortunately, atmosphere is another stain on Leon's escutcheon. The Frontenacs have never been among the elite of the OHL, and while they could usually draw a decent crowd relative to capacity at the tiny Memorial Centre, those same decent crowds are now lost in the cavernous new arena. Cheers were lost in the abyss, and there was little in the way of fan enthusiasm during the game.

Few arenas in the OHL have been the cause of as much controversy as the Leon's Centre. The debates about how and where to build the building took place for years before the downtown site on the Place d'Armes was selected. Based upon the lingering controversy and the shoehorned design, I was expecting a cramped facility borne out of political compromise. But that's not what the Leon's Centre is. It's a beautiful, spacious arena that's easily among the class of the OHL, and from the outside, it couldn't belong to any other city. The pity is that once inside, it very well could belong to any other team. One sincerely hopes that this is only a temporary issue, and that the team will make the Leon's Centre their own in seasons to come. 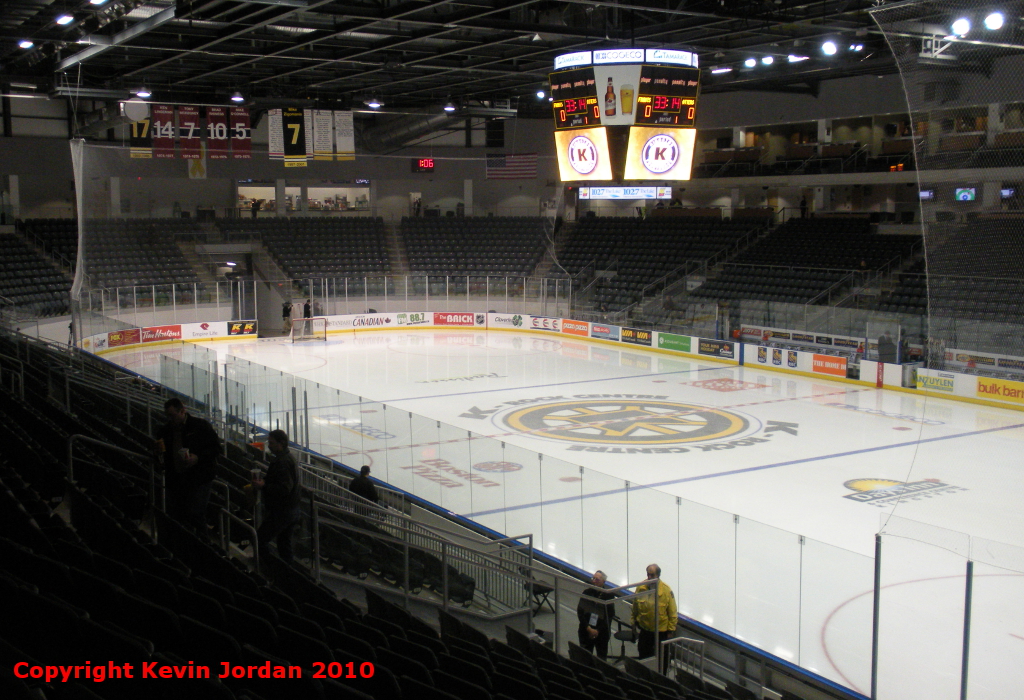 Future Developments
There are no plans to renovate or replace Leon's Centre.


Franchise History
The Kingston Frontenacs began their life as the Kingston Junior Canadians in 1973. The team technically revived the dormant Montreal Junior Canadiens OHA franchise, but given that the Junior Canadiens still existed with the same ownership and roster in the QMJHL after 1972, the Kingston squad was an expansion team in reality, if not technically speaking. The Junior Canadians name was used until 1988, when a new owner changed the name to the Raiders and the colours to black and silver. Mercifully the Raiders identity only lasted for one year, and the team was subsequently renamed again, becoming the black and gold-coloured Frontenacs. The OHL team is only the most recent Kingston hockey team to use the name; it has been associated with Kingston hockey history for over a century. Kingston's OHL team played at the Memorial Centre from their 1973 to 2008, at which point they moved downtown.


Retired Numbers
The Frontenacs have honoured several numbers, although none of them are officially retired. 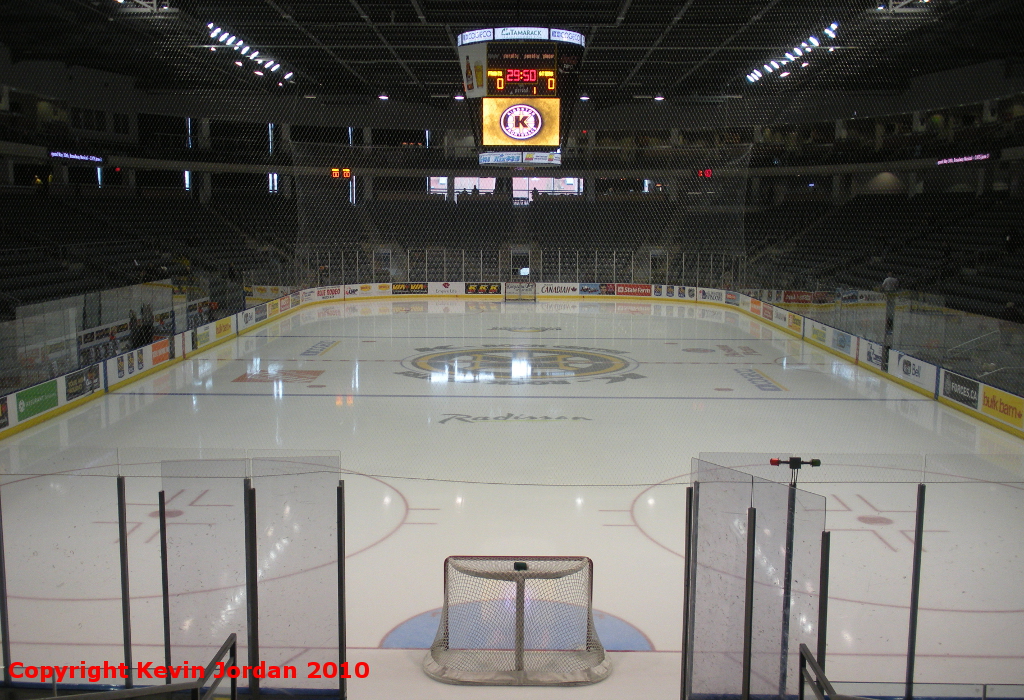